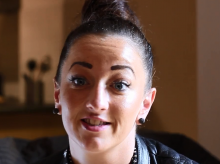 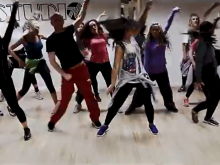 The group dancing in the Fixers film 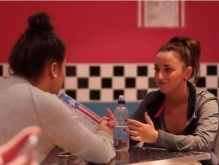 Lauren speaking with friend in the Fixers film

Crediting dance with helping her to overcome the emotional and physical trauma of being shot, Lauren Spencer is showing how creative arts can help people overcome adversity.

The 20-year-old from Liverpool was seriously injured six years ago after an unknown attacker fired an air rifle pellet at her head while she was walking home from dance class.

Afraid to leave the house for months after the incident, she has since made a full recovery and says dancing gave her the confidence to move forward.

‘It was like a coin had hit me and I didn’t even realize what happened until I felt the blood trickling down my face,’ explains Lauren, recalling the shooting.

'The next thing I remember was waking up in hospital and doctors telling me I was extremely fortunate to be alive.

'They said taking the pellet out would do more harm than good, so it’s been embedded in my skull ever since.

‘I became emotionally withdrawn after the incident, felt unsafe in my own community and struggled with my confidence.

‘But getting back on the dance floor was where I found myself again and now I’m showing other young people that no matter what you’ve been through, being creative can help you get through it.’

With Fixers, Lauren has helped to make a short documentary about her own life.

Supported by her team at MD productions, who performed on Britain’s Got Talent in 2009, the film focusses on how dance helped her through a very traumatic time.

Watch Lauren’s Fixers film ‘Rescued by Rhythm’ at the top of this page.

‘I love it,’ she says. ‘It’s such an emotional subject to talk about, but I think we got the message across really well.

‘I feel proud that I’ve turned my negative experience into a positive and now hopefully it will help others.’

The group plan to share their film on social media and also take it into schools to educate pupils on the many benefits of dance.

She adds: ‘Everybody faces challenges in their lives, but it’s how we deal with them that makes us who we are.

‘Without dance, I wouldn’t be who I am today. Give it a go because it might change your life.’

See how Antonia DiCarlo from the Scottish Highlands is
spreading happiness through dance. Watch her video here.