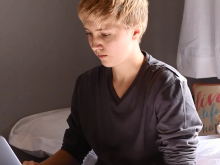 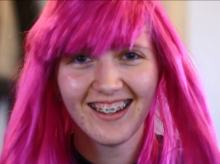 Laura wearing a pink wig in the film 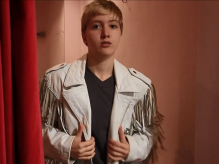 Keen to show that being gay is part of her identity and not a 'lifestyle choice', Laura Finnigan is challenging misconceptions of LGBT people to encourage more support and acceptance for those coming out.

The 17-year-old from Liverpool feels it’s wrong to trivialise a young person’s sexual orientation and to believe that it’s something that can be ‘changed’ much like an outfit, hairstyle or career path.

‘While other girls were getting boyfriends at school, I always felt like an outsider,’ explains Laura.

‘I kept it quiet at first because I was scared of how people would react, so it was a giant relief knowing that my family were there for me when I told them two years ago.

‘I get upset when people think that others like me are being silly or that it’s just a phase that we’ll grow out of.

‘I’m showing that being gay is not a decision anyone takes. It’s something you are or you’re not, and it shouldn’t give anyone the right to discriminate.’

With Fixers, Laura has helped to create a film to raise awareness of the issue.

The short piece shows how people have the power to change many things in their lives, but sexuality is not one of them.

Watch Laura's Fixers film 'Changes - Tackling Homophobia' at the top of this page.

'It’s a superb film, which really gets the message across,’ says Laura.

‘This is an issue that’s very close to my heart, so I hope it will make people think and talk in a more positive way.’

Laura intends to take the film into local secondary schools and colleges, because she feels that young people in this age range would benefit from it.

‘School is a time when you’re discovering who you are, so it would be ideal if the campaign reaches students,’ she adds.

‘I know people who’ve said they want to “turn gay” because they’ve been scarred by a bad relationship in the past.

‘They think it's an easier option, but it’s not like flicking a switch. That’s what I want people to understand.’

of the LGBT community. See their story, which featured on ITV.