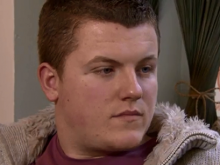 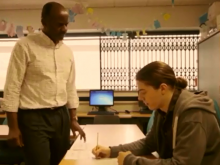 Classroom scene from the film 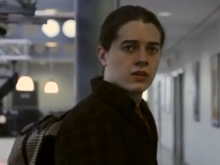 Actor playing young person with anxiety in the film

Often afraid to leave his house, Jake Land wants people to understand that anxiety disorders are real and should be taken seriously.

The 19-year-old from the Peak District, who had his first panic attack at the age of 11, says he can get up to three a day.

He’s now sharing his story so others like him know they’re not alone.

‘It’s almost like losing control of your body,’ explains Jake.

‘When I tell people, they think I’m being melodramatic and don’t take me seriously.

‘My friends often ask me to come out and socialise, but I end up making excuses to stay in as I get anxious in public.

‘If more people understood the disorder, then others like me could talk about their feelings without worrying they’ll get laughed at.’

For his Fixers campaign, Jake has helped produce a powerful film showing what it’s like to live with crippling anxiety.

Inspired by his own experiences, it depicts a young man who is overcome by a panic attack in school.

Watch ‘Cold Sweat’ at the top of this page.

‘One thing about anxiety is you can’t see it, but Fixers have done a wonderful job in capturing what it’s actually like,' he explains.

‘I was a bit on edge during the filming process because sometimes just talking about the issue can set me off.

‘But knowing I could potentially help others like myself gave me the drive to keep going.’

Jake wants to share his film in schools to help people better understand the disorder.

He hopes it will encourage others to talk about their condition without fear of ridicule.

‘Many people think we’re joking around, which I wish was true, but it’s not. Anxiety is a very real notion for the person who’s going through it,' he explains.

‘So it’s about time everyone took it seriously.’

Jake isn’t the only one showing what it’s like to have extreme anxiety.
See how Fixer Summer is helping people understand school phobia.