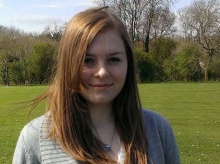 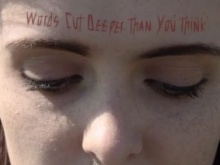 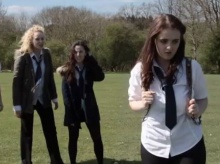 A scene from the film showing a student being taunted

Sticks and stones may break your bones, but can words hurt more than you think? Emily Willis from Surrey is showing others the mental impact of verbal abuse.

Having experienced bullying herself, the 16-year-old is highlighting the negative consequences such actions can have on psychological well-being.

‘I was bullied almost my entire life,’ explains Emily.

‘I personally know how it feels and I also have friends who have experienced the same.

‘I want to raise awareness of it - especially as people tend to try to hide the effects it has on them.’

The teenager from Cobham wants both bullies and their victims to understand how serious the impacts can be.  According to a recent survey looking into why young people self-harm, being bullied is indicated as the main reason.

‘My message to those experiencing bullying is to tell someone about it,’ Emily states.

‘I know how hard it can be to speak out, but it is really important for them to know they’re not alone and that it’s not their fault.

‘What I'd like to say to bullies is that they may be going through hard times themselves but being mean won’t make them feel any better.

‘They should think about how their actions are affecting others.’

With the help of Fixers, Emily has created a short film to show how abusive words can leave lasting scars, as a young girl is left physically marked by her tormentor’s insults.

Watch the Fixers film 'Bullying and Mental Health' at the top of this page.

Wanting the campaign to be seen by young people, teachers and their families, the Fixer feels her project successfully conveys her message.

‘I know I want to raise as much awareness as possible with my finished film.

‘Knowing what it is like to be bullied, I really wanted to help other people who are in the same situation in any way that I can.’