Have a Little Respect 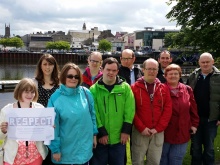 Fixers with their finished poster 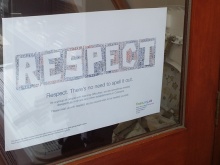 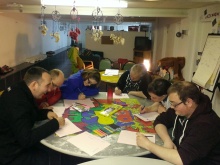 A group from Coleraine, County Derry/Londonderry, who all say they’ve experienced ridicule for having learning difficulties, want people to treat others like them with more respect.

Sereena Scott (19) and her team are determined to end discrimination and show they’re just as capable as anyone else.

‘None of us chose to have a learning difficulty,’ explains Sereena.

‘But the way we’re sometimes treated is awful.

‘When paying for things in shops, I’ve had people laugh at me because I take slightly longer to add up the money.

‘It’s like we don’t matter to people or that we’re an inconvenience to them.

‘Our campaign is about promoting equality and making people see beyond someone’s disability.’

With Fixers, the group have produced a poster campaign to encourage tolerance and consideration in their community.

Its central message is one of respect and urges people to treat others as they would like to be treated themselves.

Take a look at the group's Fixers poster below. 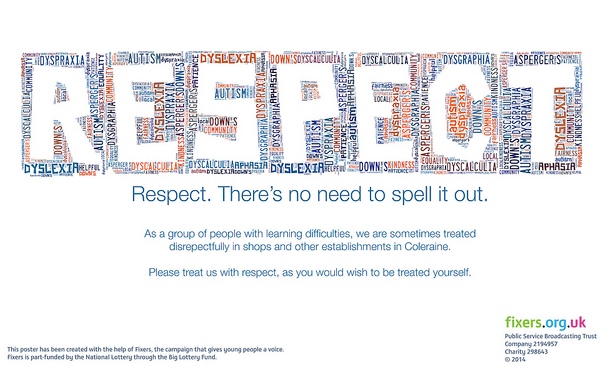 ‘This poster is a really simple way to make people aware that being disrespectful makes us feel bad,’ she adds.

'The issue has affected us all in the past and still does, so it’s great that, with Fixers, we’re getting something positive done.’

The group, who are all members of the Compass Advocacy Network, an organisation which supports people with learning difficulties, want to share their posters around Coleraine by displaying them in shop windows, schools and youth centres.

Sereena adds: ‘It’s been a great project to be part of, so it would be nice to see all that effort actually make a difference.

‘By sharing our stories with Fixers, we’ve all grown in confidence.

‘Our project has allowed us to take negative memories and put them into something creative, which has been great fun.

‘But the job isn’t done just yet. As long as there’s discrimination in the world, we’ll continue to speak up on issues that affect us.’

to end misunderstandings about the developmental disability.