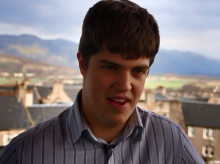 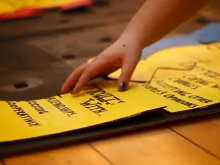 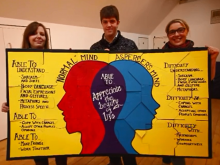 Angus Hepburn and his team from Stirlingshire are educating people about Asperger’s syndrome to end misunderstandings about the condition.

The 16-year-old, who was diagnosed as a child, is concerned that many people make snap judgements because they fail to comprehend the syndrome’s complex nature.

‘Having Asperger’s means we see the world slightly differently to others, which some people find strange,’ explains Angus.

‘We often don’t handle change well and struggle with sarcasm, but our thought processes aren’t wrong. They’re just not like most people.

‘However, if we set our minds to something, we will make it happen- so don’t think of us as being incapable, because we’re not. This message is the heart of our campaign.’

With the help of Fixers, Angus and his team have produced a film showing some of the issues young people with Asperger’s face every day.

In the short documentary, the group use a jigsaw puzzle as a metaphor to show how those with the disorder piece the world together.

Watch the group's film 'Asperger's Syndrome - Thought Processes' at the top of this page.

Angus adds: ‘We all love the film. We wanted it to help people better understand the condition and ultimately make people with it more approachable.

‘The aim is to stop others from judging and give us a chance.  One thing everyone has in common is we can appreciate the beauty of life. It’s just that we see it from a different perspective.’

The team, who are all members of PLUS, an organisation which supports young people with disabilities, intend to share their film in local schools and on social media.

‘It’s important that as many people as possible hear our message,’ adds Angus.

‘If you are finding it difficult communicating with someone who has Asperger’s, don’t dismiss them. Get to know them better.

‘Yes, we have Asperger’s, but it’s part of who we are. I hope more people begin to accept that.’

See how Dwaynne Way is using an animated film

to increase people’s understanding of Asperger’s.