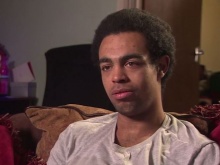 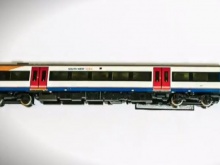 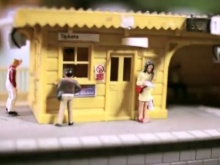 Knowing that a bad decision at a level crossing nearly cost him his life, Ian Carter is sharing shocking statistics with school pupils to try to prevent others making a similar mistake.

The 21-year-old from Cosham in Hampshire collided with a crossing barrier after ignoring the warning signals and rushing through on his bike.

He was left needing four hours of facial surgery, eight shots of anaesthetic and thirty-six stitches. For two weeks he could only have food through a straw and he received a five-thousand pound fine.

‘When I crashed on a crossing I could have lost my life,’ says Ian.

‘Fortunately I’m still alive and I want to use my experience to educate people.

‘Others need to be aware that all it takes is a split-second decision and the outcome could be a lot worse.’

With Fixers, Ian has been working on a stop-motion animation to highlight the dangers and tell his story.

In the film he reveals that there have been 44 deaths on level crossings over the past five years.

It also includes CCTV footage of his crash and photos showing his injuries.

Watch Ian's Fixers film 'Don't Take The Risk' at the top of the page.

‘At the school visits I use pictures of my injuries and the video of the accident to show how much damage you can cause,’ Ian explains.

‘Even with all the safety films you’re shown some people still think it’s not going to happen. I thought that – but obviously it did.

‘It takes someone to say “I’ve been there” to really make young people stop and think.’

Ian plans to use his Fixers animation at future school visits, along with his broadcast film.

He has the support of Network Rail who are pledging to help him promote his resource. He is also hoping to pursue his dream of becoming a train driver.

‘My campaign is all about turning a negative into a positive and making a difference, rather than not doing anything about it.’

Whether it’s crossing the railway or the roads, Fixers are campaigning to
improve safety. Read about Ursula Campbell's Fix.