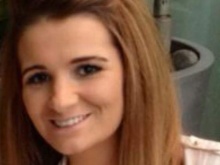 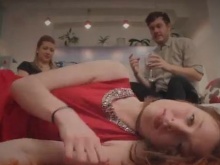 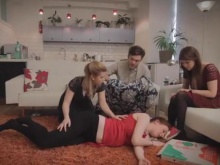 The film shows how to react when someone has a seizure

A 24-year-old from Muswell Hill in North London wants more people to know how to react when someone has an epileptic seizure.

Mikaela Greenwood has epilepsy and wants others to realise that responding in the right way can reduce the risk of injury.

‘Watching someone have a seizure, whether it’s for the first time or the hundredth time, is a frightening thing,’ explains Mikaela.

‘The more you understand it and realise what you are able to do, the more help you will be and there will be less chance of any accidents happening.

‘You don’t need to be scared - you just need to remain calm and focused.’

With Fixers, Mikaela has created a film demonstrating what should be done in the event of someone having a seizure.

She hopes that providing step-by-step instructions will prevent people from acting in a way that could cause damage.

‘There are a lot of old wives’ tales about what you should do when someone has a seizure,’ she adds.

‘For example, holding them down or putting a spoon in their mouth to stop them swallowing their tongue.

‘You don’t do any of this because you can actually cause long-term problems for the epileptic person.

‘The person who is trying to help them could also be injured.’

The Fixers film shows how a group of young people react when one of their friends has an epileptic seizure.

It explains the acronym ACTION (Assess, Cushion, Time, Identity, Over, Never) which is provided by the organisation Epilepsy Action as an easy way to remember what to do during and after an episode.

‘I hope that this film will engage viewers and prompt them to research the different types of epilepsy. It will enable them to understand the simple steps of what to do,’ says Mikaela.

‘I hope that this video will be used by large companies, schools and colleges.

‘The more we can raise awareness, the better.’

Watch her film to learn how to identify the signs.