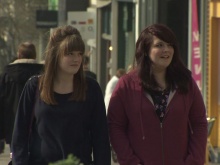 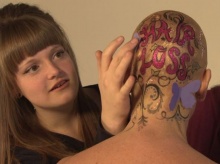 Lauren makes some adjustments ahead of the Fixers photo shoot 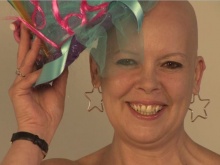 After seeing someone close to her experience the life-changing effects of alopecia, a Plymouth Fixer and her team have launched a colourful campaign to raise awareness of the hair loss condition.

Watch their story, broadcast on ITV News West Country (W) in April 2014, above.

Led by 16-year-old Lauren Lyons and her friend Courtney Drage (16) the group want to tackle the stigma surrounding alopecia, while showing those with the autoimmune disease they aren’t alone.

‘Somebody that loses their hair can feel quite vulnerable. I have a relative who has it.’

‘We’re surrounded by lots of images of people with perfect hair.’

With Fixers, the group have enlisted the help of several women and a little girl with alopecia to feature in a poster campaign.

They’re using body paint and brightly coloured props to show that a person shouldn’t be defined by their hair.

Michelle Chapman from Alopecia Awareness, features in poster series and is one of three people living with alopecia to appear in the broadcast film.

‘Not having hair makes you feel very alone and very isolated at first,’ she explains.

‘The doctors can’t tell you very much about it.

‘They don’t know why it happens and they don’t know how to fix it and that’s a very difficult thing for anyone to come to terms with.’

Fixer Lauren adds: ‘It was incredibly inspiring to meet people who’ve been through these experiences and to see how they’ve dealt with it.

‘I hope that people with alopecia see our posters and have more confidence in the fact that there are people out there like them.

‘I also hope it helps those that don’t have alopecia better understand what it is.’

Read more about a Fixer from Liverpool who’s sharing
her experiences of alopecia to help others.

About Lauren and Courtney