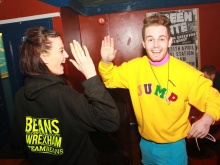 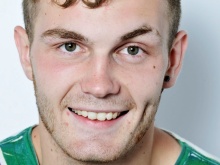 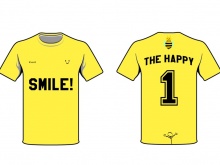 Look out for volunteers at the Fixers event wearing these!

After the United Nations named 20th March the International Day of Happiness, a group of Fixers from Wrexham want to spread positivity in their corner of the world.

Led by 21-year-old Tobias Perks, their aim is to make people smile by chatting to them, telling jokes, giving out stickers and offering high fives.

They’re holding an event at Eagles Meadow Shopping Centre in Wrexham between 11am and 3pm on Saturday 22nd March.

‘I think a moment of smiling makes the world a brighter, happier place,’ says Tobias.

‘Often I encourage people to smile as I want them to know that, no matter how self-conscious they may be, everyone looks beautiful when they smile.

‘I personally see us as being lucky to be here and although money might not come for free, a smile does!’

On the day, shoppers will be greeted by volunteers in yellow t-shirts.

There will also be a street magician, jugglers and actors dressed up as popular animated characters, like Monsters Inc.'s Mike Wazowski and a minion from Despicable Me.

'We intend to launch ourselves upon Eagles Meadow with colour, energy and flair,' Tobias explains.

‘People can get involved on the day by clapping, dancing, singing and interacting with our volunteers and characters – anything that makes them happy and encourages them to share their passion.’

As well as getting people to smile on the day itself, the group would like to see their Fix leave a lasting legacy in the form of an annual event.

Tobias adds: ‘It’s important for various reasons to let positivity take over every now and again and to seek motivation and change in your life to prevent unhappiness.’