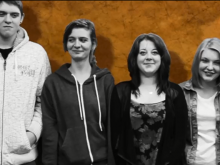 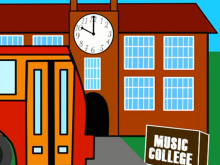 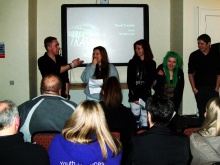 Fixers at their film launch

A group of Fixers from rural Callander, who want cheaper public transport in their community, have produced a film highlighting the difficulties they face getting around.

Seventeen-year-old Amy Warbrick and her team feel young people in their village face challenges with commuting, because bus prices are too high and services are infrequent.

‘Growing up here was great. It’s a small, beautiful part of the world, but going anywhere further afield can be an absolute nightmare,' explains Amy.

‘This can often mean young people miss out on career opportunities or higher education simply because they can’t get from one place to another.

‘The nearest town is Stirling, which is 16 miles away, and costs £9 to get there and back. The last bus to Callander on a Saturday is at 8pm, which means we can’t even hang out with our friends past a certain time.’

The animation shows the stories of four teenagers, who are directly affected by the transport issues in their town.

‘We feel the film is a good representation of difficulties we face as young people living in rural Scotland,' explains Amy.

‘The stories are real and we feel the impact of the travel problem on a daily basis. We hope the film helps bus companies, the council and local decision-makers to understand how young people feel.’

The film, which the group hope to share on social media, was launched during an event at the Callander Youth Project on Wednesday 12th February.

Around 30 people attended the screening, including transport bosses, school representatives and youth council members, all having positive comments about the campaign.

Brian Peat, Commercial Manager, FirstGroup, said: ‘The young people’s presentation was very clear and they got the message across in a creative way.

‘We hope to be able to work with the whole community and look at the issues that people have and work with them to find solutions where we can.’

Watch the group’s film ‘Travel Trouble’ at the top of this page.