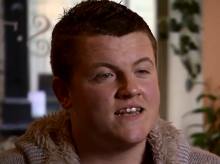 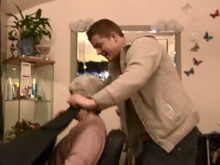 Jake helping out in hair salon 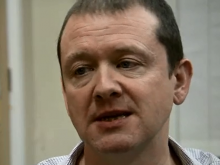 A Derbyshire Fixer, who’s lived with crippling anxiety since childhood, is now helping others to better understand the disorder.

His story was broadcast on ITV News Granada on Friday 7th February.

Nineteen-year-old Jake Land of New Mills had his first panic attack at the age of 11 and says they’ve become more frequent over the years.

‘It used to happen every so often, like once a week, but now it’s every single day,’ he explains.

‘Because my anxiety’s become so bad, I dropped out of school and now help out in my mum’s hair salon.

‘People can’t see that you’re suffering from it, and it is disabling inside. I think you’ve got to have had some sort of anxiety attack to realise the fear that goes through you.’

Markus Greenwood, Chief Executive of Mind in Salford, features in the piece explaining how anxiety can be debilitating.

‘A panic attack is an exaggeration of the body’s natural response to fear, such as dizziness, dry mouth and a rapidly beating heart,’ he says.

‘It might feel like you’re going mad or having a heart attack, so they’re really frightening experiences for people.

‘You can feel very powerless so the more people that can support and empathise with someone, the better really.’

Jake hopes creating a film with Fixers will encourage more people to talk about the condition without being ridiculed.

‘People have seen when I’ve had an attack and accused me of being drunk,' the Fixer adds.

‘Now to be given a voice feels amazing because I know that it’s going to help people.’