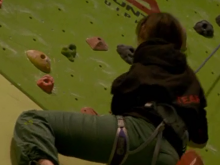 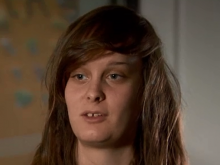 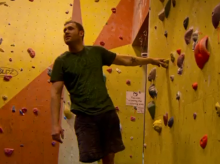 A York Fixer, who was born without an arm, says para-climbing has changed her life and is now calling for more young people with disabilities to take up the sport.

Her story was broadcast on ITV News Tyne Tees on Thursday 6th February.

Now a member of Team GB, 16-year-old Sianagh Gallagher took up the sport at the age of ten and says it has increased her drive and determination in life.

‘I was born without a left arm, collar bone or shoulder blade,’ she says.

‘The doctors didn’t think I would last the night. I’ve adapted because it’s all I ever knew.

‘When you’re climbing and you achieve something that’s hard for able-bodied people, it kind of motivates you to carry on and see what else you can improve on.’

In the broadcast piece, she meets fellow Team GB climber, Tom Perry, who lost his leg in an industrial accident.

He maintains the sport has helped him mentally and physically get over such a traumatic experience.

‘It’s pushed my drive,’ explains Tom. ‘I could have sunk into a dark place after the accident, but I’ve always thought there’s more to me than that.

‘So climbing's been a good outlet.’

Sianagh hopes to make a film with Fixers, which shows how the sport has helped her.

She explains how much the project means to her: ‘It’s a massive chance. I would really love people to be inspired by me and get that opportunity to go climbing.

‘I think there are a lot of people out there with a disability that don’t really think they can do much.

'But if you can climb, you can do anything.’