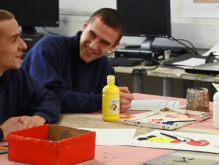 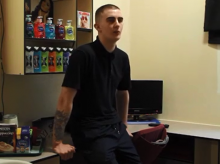 A group of Fixers are leading a powerful campaign, which aims to release young offenders from the shackles of prejudice.

The young people are currently in custody at HM YOI Polmont and fear many employers won’t give them a chance on the outside because of the negative stereotypes about people who have served prison sentences.

Lead Fixer Craig (18) thinks the media plays a role in this, often focussing on prison horror stories yet failing to highlight the good work that goes on such as fundraising and learning new skills.

‘I get fed up with all the negative things they say and write about young offenders in the papers,’ he says.

‘I hope our Fixers campaign will raise awareness by showing people a realistic picture of what we do and challenge the negative stigma that we’re all the same.’

Craig has been in custody since 2011 and maintains he’s a different person than when arrived.

He feels most people think young offenders spend their days being lazy and getting into fights, which he explains is not true in many cases including his own.

‘Going to prison has made me more mature and helped me think about my future,’ Craig explains.

‘I volunteer in youth work to help the younger boys think about their mood, how to cope better with prison life and to think before they act. I enjoy being a mentor to them because I know what I was like when I was that age.’

The group’s Fixers film was shot at Polmont and shows how prison life has given some young people in custody renewed focus.

Craig adds: ‘We wanted our campaign to show the truth. The reality is that most young offenders who are convicted get involved by working and getting qualifications.

‘Our fundraising group have raised over £2,000 for different charities. Nobody hears about these achievements because they don’t sell papers. That’s the point behind our film.’

Craig and his team want to get their documentary out to as many organisations as possible, not only to raise awareness but also to help others like them find a job on the outside.

He adds: ‘Our project can help change how employers see us and show them we are capable, skilled and hard-working when given the chance.'