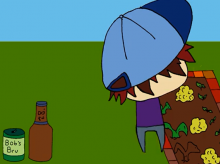 Scene from the animation 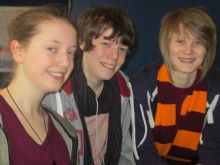 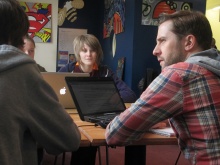 A group of Fixers from Berwick-upon-Tweed, who feel young people are maligned by the media, hope their film tackling these stereotypes makes headlines for the right reasons.

Concerned that the good work many youths do is overlooked, they’ve helped produce a short animation focusing on the positives.

Fixer Felicity Frank (17) hopes the film will stop the public from judging others in her age group as being anti-social and irresponsible.

‘The point of the campaign is to break the stereotypes that currently exist,’ she says.

‘We feel that reporting negativity is often the easiest thing to do because it’s more sensational.

‘Yes, there are a few young people who may not be up to much good, but I’m sure adults do bad things too. This is what our film sets out to put right.’

The group, who appeared on ITV News last year to talk about their campaign, are all members of Berwick Youth Project.

They feel that, whether it’s intentional or not, the media’s portrayal of young people has a knock-on effect in small communities like Berwick.

‘Often, it’s the looks you get walking down the road from people you haven’t seen before,’ Felicity adds.

‘It’s frustrating that some older members of the community don’t trust us, which is partly down to the image they have of young people in the media.’

The group sketched the drawings used in the animation and are hoping to show it to other young people as well as members of older generations.

‘We’d like to go around local schools and present our film there,’ says Felicity.

‘While it’s important that the older generations understand that we’re not all out to cause mayhem, we thought showing the film to young students will give them a better understanding of the stereotypes that exist.’

You can watch the group’s film 'Challenging Media Stereotypes' at the top of this page.