On Track for Cheaper Fares 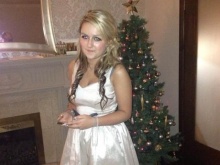 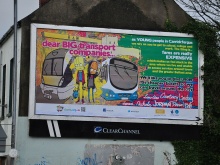 A Fixer from Carrickfergus, who thinks the cost of public transport is too high for young people, is hoping her campaign is just the ticket for change.

With the help of Fixers, Loni-Ann Steenson (17) and her team have produced a billboard encouraging commuter travel companies to think twice about their fares for under 19s.

In an average week, Loni-Ann spends around £30 on transport commuting to work from Carrickfergus to Whitabbey.

She says it’s a big problem for young people who don’t have a lot of money and rely on bus and train services to get around.

‘Public transport is like a lifeline, especially for young people like me. Whether it’s for school, college or work,’ says Loni-Ann.

‘But at the moment in Carrickfergus, we feel trapped and helpless because it’s just too expensive to go anywhere.

‘You have to put money aside at the start of the week, which leaves you with very little left over.

‘Our campaign is to make it more affordable for under 19s.The more young people that use public travel to get around now, are more likely to do so in later life. It's important that they’re supported.’

The lead Fixer hopes the group's striking billboard design sends a message to the council and ‘big transport companies’ to do something about, what they feel, is an important issue.

She adds: ‘I absolutely love the finished design. The point of printing a billboard on the streets of Carrick is that everybody will see it.

‘Although we’re targeting transport companies and the council, we hope it will send out a message to the wider public and get more people talking about the issue.

‘The ideal scenario is that decision-makers realise the cost of travel is unmanageable for many young people and reduce the fares.

‘After all, it affects everyday life.’

Click the image below to see the full-scale billboard design: 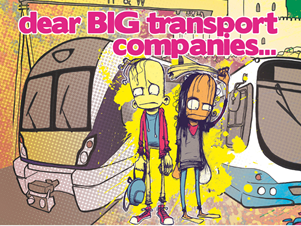