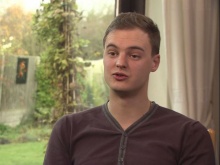 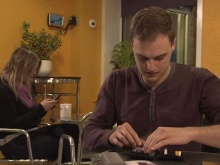 Phil checks his blood sugar in the film 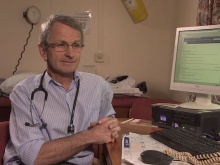 A diabetic Fixer from Kent, who has to inject himself with insulin regularly to avoid falling into a coma, says the condition shouldn’t be considered a life sentence.

Phil Harrison (23) from Sandwich wants young people to take type 1 diabetes seriously, but to understand that it can be controlled.

His story was shown on ITV News Meridian (E) on Thursday 9th January.

‘I was diagnosed with diabetes eight years ago,’ says Phil.

‘The symptoms were tiredness, weight loss and I was always feeling thirsty and going to the toilet at irregular times.

‘My daily routine consists of regular blood count checks and the type of insulin I’m on means I inject before I have a meal - maybe five times a day.

‘Then, there’s insulin you take before you go to bed. Injecting doesn’t hurt at all.’

In the broadcast piece Phil meets with specialist Dr Neil Martin from the Paula Carr Diabetes Centre. They discuss whether there are particular issues for young men who are diagnosed with the condition.

‘I think there are both physical and psychological challenges,’ says Dr Martin.

‘They are going through puberty and their hormones make insulin control more difficult.

‘They’re not necessarily looking far into the future. They want the here and now so some of the restrictions of diabetes are difficult to cope with.

‘It’s very important that young people with diabetes start taking notice of their health but there’s nothing in life that they shouldn’t be able to do.’

Phil also compares his experiences with other people with type 1 diabetes in the film.

‘The main thing is not to get yourself down about it,’ adds Phil.