Say No To Child Poverty 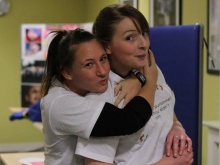 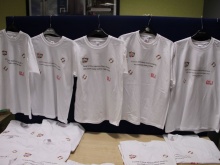 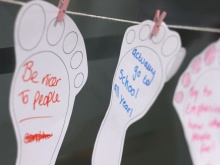 A group of Fixers from South Wales have launched a campaign to end child poverty in and around Newport.

They held an event on 3rd December at Bron Afon Community Housing in Cwmbran to raise awareness of the problem in their area.

‘Child poverty should not exist in the UK,’ says lead Fixer Rosie-Louise Mitchell (19).

‘As a young mother, I would never like to see any of my children go without the bare essentials, such as food and clothes to keep them warm.’

The team asked attendees at the event to pledge to do something in 2014 to help put a stop to poverty.

The supportive messages, which didn’t have to be about giving money, were written on paper footprints and hung on a washing line.

They included ‘I am going to be less materialistic and appreciate what I already have’ and ‘I will help other people by listening and supporting them with their difficulties’.

Around 100 people attended the event, including young people and youth workers from Newport Youth Service, other Fixers and their families and representatives from Bron Afon and Charter Housing associations.

They were invited to swap any of their old, unwanted clothes at a ‘swap shop’ and were offered a t-shirt created by the Fixers bearing one of five anti-poverty slogans.

Anyone wanting to show their support for the campaign was given the opportunity to model their t-shirts on the catwalk later in the evening.

‘The message I wanted to get across is that child poverty does exist but that with help and support we can stop it,’ says Rosie-Louise.

‘I think the event went very well and those that attended must now have a different perspective of poverty in the UK.’

The group will continue to spread their anti-child poverty message via a social media campaign. You can visit their Facebook page ‘Blessed To Be A Blessing’ by clicking here.

‘I hope to see a decrease in child poverty as at the moment 1 in 4 children live in poverty in the UK,’ Rosie-Louise adds.

‘No child should be born without a chance.’