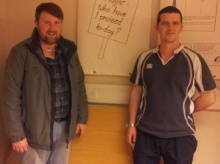 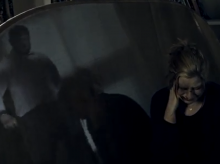 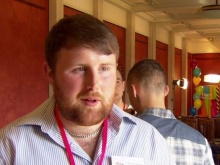 A Fixer, who helped produce a powerful film about the realities of violent relationships, has held a screening to an audience of ex-offenders.

Jonny Lennox (25) who decided to start the campaign after seeing some friends experience domestic abuse, showcased the short piece at the Focus on Family Centre in Ballysally on 4th December.

‘Crazy Love’, a film which aims both to empower victims and reform perpetrators, was screened to a group of young men, who are undergoing therapy for a history of violence against their partners.

‘I was a bit apprehensive about the launch and didn’t know how the film would be received,’ says Castledawson Fixer Jonny.

‘But it went down well. Several audience members said they wouldn’t be sitting here if they’d seen the film a few years ago, which was a proud moment for me.

‘Of course it will take more than a film to reform someone, but it’s definitely a step in the right direction.’

Jonny, who features in the Fixers film playing the role of a violent partner, also hosted a post-screening discussion where attendees spoke about their history as domestic abusers.

One respondent, who was moved to tears by the film, said: ‘That was hard to watch. It stirs up loads of emotions in me.

‘There are definitely people in violent relationships who will at least stop and think when they see this. I will definitely be sharing it.’

Another audience member added:  ‘I recognise myself in that film. I was that guy. I remember being up in my bedroom after I kicked my partner wondering “what have I just done? I need help.”’

Jonny now aims to share the film on social media: ‘I think people will watch it for different reasons, so having as wide an audience as possible is ideal.

‘I wanted it to do two things. Firstly, to let victims know there is hope out there and secondly, to show perpetrators they can right their wrongs.’

The screening was part of a dual launch and is due to be shown to victims of domestic abuse in the New Year.