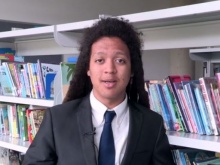 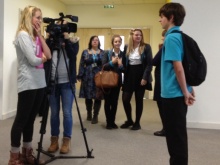 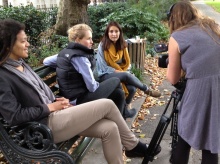 Solomon with a student and the Fixers creative team

A Fixer from East Sussex wants head teachers to better prepare students for life outside the classroom.

Seventeen-year-old Solomon Curtis from Hastings has finished his Fixers film calling for a broader curriculum that gets young people ready for the ‘real world’.

Among the non-traditional subjects he’d like to see taught in schools are political education, employability skills, and sex and relationship education from primary school age.

Solomon, who’s Vice Chair of the British Youth Council, says: ‘Preparing young people for life first came to my attention when over 250,000 people told the UK Youth Parliament that it was a priority issue.

‘I’m passionate about it personally as I was always an academic student but I studied at a secondary school that didn’t equip students with life skills.’

Solomon is concerned that schools focus too much on getting pupils ready for exams, leaving them unprepared for what comes afterwards.

In his documentary he speaks with two students who support this view and wish they had received more advice and guidance when it came to developing skills for life.

‘I think the film conveys the right message,’ says Solomon.

‘It shows good practice as well as exposing areas of the curriculum that need improving.’

Tim Loughton MP, the former government minister for children and young people, also gives his opinions in the film.

The idea is to show the documentary to head teachers across East Sussex and to allow those campaigning on the issue of a broader curriculum to use it as a resource.

‘If the film inspired head teachers to prepare students for life, then I feel I’d have achieved my aim for the film,’ says Solomon.

You can watch Solomon’s Fixers film ‘Skills for Life’ at the top of this page.