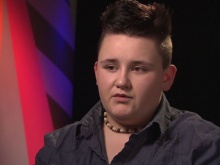 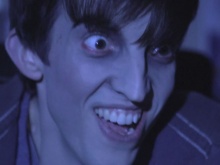 An actor portraying an internet troll in the Fixers film 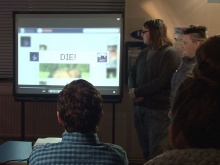 An audience watches the film

A 17-year-old Fixer from Merthyr Tydfil in Wales has helped to create an anti-cyber bullying campaign with a twist.

Her story was broadcast on ITV News Cymru Wales on Thursday 5th December.

Jessica-Jade Davies and her group have made a short film depicting internet abuse, showing the situation from the perspective of the bully.

‘I wanted to do this Fix to make people aware of the effects this behaviour can have on both parties,’ says Jessica.

Their short film, entitled ‘Someone is Wrong on the Internet’, depicts a young person verbally abusing people online for fun. This continues until the bully physically turns into a real-life troll.

‘It being shown from the bully’s perspective is really important,’ explains Jessica.

‘It shows how often the people doing this sort of behaviour online might think that it’s just for fun, but our video shows how that can quickly progress.’

Premiering the film in their hometown, young people in the audience were optimistic of the film's potential, with one young person saying:

‘I think if a troll was to watch the film and see that what they’re doing is hurting other people, I think it might help them to change their ways.’

Jessica adds: ‘One day they could be bullying the wrong person who’s not in a fit state of mind to deal with it.

‘I’d be happy if we made the bullies realise what they are doing because without the bullies there wouldn’t be a victim.’

Watch the group's Fixers film 'Someone is Wrong on the Internet' below.