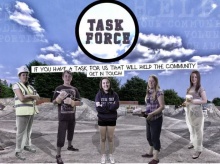 An image from the poster advertising the Task Force 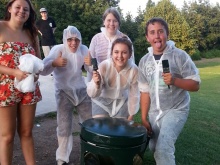 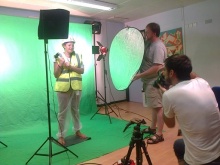 A team of Fixers from Somerset, who aren’t afraid to get their hands dirty to improve their local area, have officially launched their ‘Task Force’.

The Keynsham Community Task Force will undertake odd jobs for free, including painting and repair work, suggested to them by people living in their town.

With the help of Fixers, they’ve created posters, flyers and a banner, featuring members of the group, to advertise that they are ready for action.

They handed out their flyers to a crowd of more than 600 people at Keynsham Youth Fest on Saturday 21st September, asking those who took them to write the details of any tasks they would like to see completed on the back.

Among the responses was a request for the Task Force to paint a venue for a group of cadets.

Lead Fixer Phoebe Bidgood (16) says they are hoping the public will give them feedback when the jobs are finished.

‘It would be good to hear that people have noticed we’ve done the tasks and that they think we’ve made a difference,' explains Phoebe.

‘If it all goes well and the work we are doing gets recognition we will look to expand to include other towns surrounding Keynsham, like Saltford, to try and improve other communities as well.’

The publicity campaign, produced with Fixers to raise awareness of the Task Force, includes contact details for people to get in touch if they want something done. You can see the three different designs below.

‘The posters are great and the photo shoot was really good fun,’ says Phoebe. ‘I enjoyed getting dressed up and doing the different poses.’

The Task Force hope that displaying their posters and banners will highlight the good work young people do.

‘Some older people in the area don’t think too highly of young people,’ adds Phoebe.

‘We want to prove that we are not all troublemakers. We want to break down that stereotypical barrier and bring the community together.’