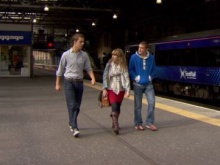 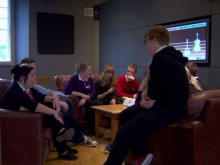 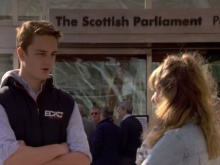 Fixers Finlay and Nicola outside the Scottish Parliament

A group of Fixers from the Scottish Borders want young people to show more of an interest in politics ahead of 16-year-olds being given a unique chance to vote in next year’s Independence Referendum.

Their story was shown on ITV News Lookaround on Thursday 3rd October.

Nicola Pringle (16) from Oxton, and Finlay Duff (17) and Scott Redmond (16) from Hawick are Members of the Scottish Youth Parliament.

With the help of Fixers, they want to encourage young people to become more politically aware so they make their voices heard by using their vote.

‘I am really keen to break down politics as a serious adult subject,' says Finlay.

‘People look at politics and think it’s a big scary subject. I want people to realise that it’s not.’

In the broadcast piece, Nicola, Finlay and Scott meet the leaders of the Yes Scotland and Better Together campaigns.

‘I think anything that can be done to encourage participation in the democratic process, to make sure that your politicians are held accountable by all generations, is hugely important,’ says Blair Jenkins of the Yes Scotland campaign.

Blair McDougall, of the Better Together campaign, adds: ‘People talk about young people being the future, and they always forget that they’re the present as well. I think there is a bit of an experiment with votes at sixteen that will affect the future of youth participation in Scotland, and across the UK.’

‘You do feel there are attempts to reach us from Holyrood, but sometimes it’s not enough,' says Fixer Scott.

‘I think you have to start in schools. We don’t get taught directly about politics so it’s not reaching enough people.’