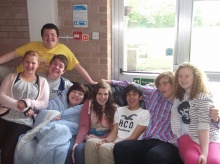 The group of young carers 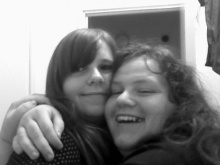 Becky with her sister

A group of Fixers from Dorset are creating a reality TV-style film to show others what life is like as a young carer.

Eighteen-year-old Becky Hammerton from Christchurch has been a carer since she was 10 years old and is leading the campaign.

‘I want to raise awareness of what a young carer is and does, because I don’t think people really understand the role and the pressures that they can face.’

Because of this lack of understanding, Becky and her team of Fixers feel that schools and other students are sometimes unsupportive and unaware of the stress young carers experience.

With the help of Fixers, the group have decided to make a 'Big Brother' style film to be screened to students and teachers.

With parts of their day-to-day life being filmed and included in the project, they hope to raise awareness of the challenges that they cope with.

Tasks that the young carers in the project undertake on a daily basis include giving medication, taking care of siblings, cooking, washing and cleaning.

Combined with full-time education, the young carers can often find themselves having difficulty concentrating and running late for class, with one Fixer noting that she doesn’t feel comfortable going to college all day and leaving her mother at home.

The film will also include a 'diary room’ similar to that in the televised ‘Big Brother’ reality show, where the carers can vent their frustrations and worries to the camera.

The Fixers ultimately hope to create a supportive network for those having to balance a stressful home life alongside school responsibilities and a social life.

‘Challenges include trying to have fun in my life but wanting to do what is best for my parents, often sacrificing things,' says Becky.

'Although there are many difficult times faced as a young carer, there are positives as well, such as being able to have such a close-knit family and a close bond with my parents.'

Caring Behind the Scenes 9th May 2014