Music for Change on ITV 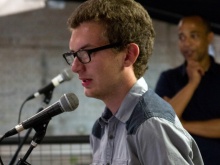 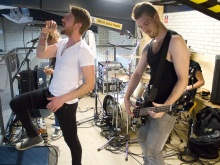 A band at the event 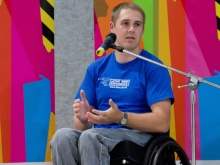 A Bournemouth teenager is using his love of music to bring young people of all abilities together to fight the negative labels often attached to those with disabilities.

His story was featured on ITV News Meridian (W) on Thursday 8th August.

Fixer Chandos Green (18) was left with some noticeable differences following treatment for brain cancer during childhood.

Growing up, he felt friends distanced themselves because of his disability, which made him feel alone and outcast. Click here to read more about Chandos' story.

‘Because of this, people pushed me to one side. They saw me as different and thought they would catch what I had.

‘I didn’t want to look like I had a disability so I kind of hid away.

'I started writing lyrics when I was eleven. It’s helped me to get through some really dark days.’

With his music, other local bands in his area, and a range of skating young people, Chandos held a music and sports event to showcase the talents of disabled people and encourage others to stop stereotyping.

He says: ‘What Chandos is doing is fantastic. It’s making other people with disabilities realise how we can go on to achieve stuff, making people realise their potential also opening the eyes to the public that we are still people and just to treat us as you would anyone else.’