The World Through My Eyes 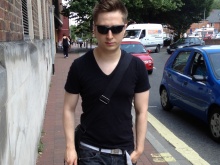 Fixer Richard walking down the street 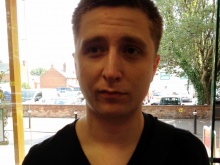 A Fixer, who suddenly became blind due to a rare genetic disease, hopes he can create a resource pack which stops some of the ignorance towards blind people.

At 23-years-old, Richard Wheeler’s life changed forever. Without warning, Richard rapidly lost his vision in the summer of 2011.

Now 25, Richard is still trying to come to terms with his blindness. Richard has a rare genetic disease called Leber’s Hereditary Optic Neuropathy, a condition which affects just one in 25,000 people in Britain.

The disease, which usually affects men in their twenties, destroys cells in the optic nerve and causes irreparable blindness.

Richard’s condition was only diagnosed after weeks of tests, and it shocked his family to discover his mother was a carrier of the disease.

‘I was seeing less all the time and my central vision was blurring,’ says Richard. 'I was getting worried and decided that I needed the tests.

‘But when we went to London to meet an eye specialist, I knew it was not going to get better.

‘The blindness is like looking through greaseproof paper. I cannot recognise faces and my colours are messed up,’ he says.

But Richard has not given up. A keen rower, he still keeps active in his leisure time. Next year he also hopes to go to university.

With Fixers, Richard hopes his resource pack - containing information about visual impairment, and what other people can do to help those with eye-sight disorders - will help people understand blindness.

‘To look at me, people cannot see that I’m blind because there is nothing wrong with my eyes,’ he explains.

‘Some people are incredibly ignorant. I have been on nights-out in Winchester before using my white stick and people have shouted at me, ‘You’re not blind!’ which is awful.’

‘That is why I am working with Fixers – to educate the younger generation so they do not grow up with the same misconceptions that many adults have about blindness.’

For more information on visual impairment and how it affects your life, click this link.