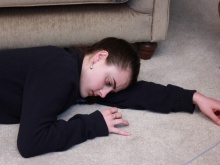 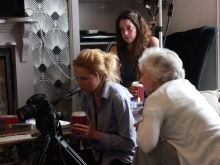 The team behind the film planning a scene 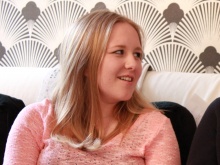 A young woman, who had a stroke at the age of 21, has completed her film with Fixers highlighting the realities of strokes affecting young people.

Twenty-three year old Becki Cobb hopes her film, entitled ‘Signs’, will make people aware that they should not assume that strokes only affect elderly people, and that they can in fact strike at any age.

Through her film, she also hopes people can identify the signs of a stroke by using the NHS recommended ‘F.A.S.T.’ technique.

‘Reacting to a stroke quickly is really important, as it can limit the damage a stroke can cause,’ says Becki.

‘People need to be aware of the signs of a stroke, and the assumption that strokes only happen to old people needs to be challenged. I never thought it would happen to a young person, but I’ve met many young people who have also had strokes.’

Becki was walking to work in February 2011 when she had a stroke. (Click here to read more about her story.)

‘I really had no idea what was going on and, had someone not found me, the result may have been different,’ says Becki.

‘I still have a slight limp and require physiotherapy to restore movement to the left side of my body, but I am making a lot of progress.

‘There is life after a stroke, but you need to catch the signs of a stroke early to maximise the chances of a full recovery.’

You can watch Becki’s film at the top of this article.

For more information about stroke, visit the Stroke Association website.