A Voice Against Violence

One of the anti-domestic violence posters 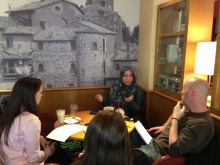 A Bradford Fixer is creating a poster campaign to make people more aware of the signs and effects of domestic violence.

Juwaria Mohammed (21) has seen how abusive relationships can ruin lives and, with the help of Fixers, is determined take this taboo into the open.

‘I know people who have suffered through domestic violence and it’s time to do something about it.

‘It ruins families. There are many ways to combat anger and frustration - being violent is not one of them.’

Recognising that domestic violence happens in all communities, Juwaria also wants her Fixers campaign to reflect this point.

‘Posters are something everyone can see. They’re very visual and that’s exactly what we need,’ she says.

‘Plus I think a poster campaign will allow us to highlight different points of view, showing that domestic violence affects different people.

‘I’ve seen people suffer in my own community, but I’m sure it happens everywhere regardless of what your background is.’

Juwaria hopes the posters will reach a wide audience and will encourage more people to stand up against domestic violence.

‘The message behind them is an empowering one. I don't want that to ever happen to me - to have my entire independence and character ruined by bullies.

‘I want other people to understand that they should not let that happen to them either.’

If you're experiencing domestic violence or know someone who is, contact the National Domestic Violence Helpline on 0808 2000 247.