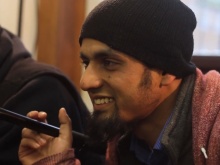 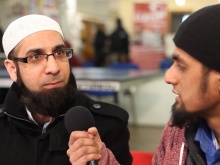 Mustak interviewing one of the attendees 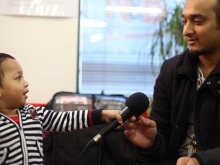 Two attendees at the event

A Fixer, determined to encourage better communication between younger and older people in his community, has completed his film capturing the first of his intergenerational workshops.

Eighty-seven people attended Mustak Abdul’s ‘Closing the Generation Gap’ event in Swansea and participated in a number of activities designed to bring the community together, regardless of age or ethnicity.

The 22-year-old Fixer, who studies at Swansea Metropolitan University, is alarmed by the number of younger and older people who avoid communicating with each other.

He believes this lack of contact leads to misunderstandings between the generations, and this can often cause tension.

For his Fixer campaign, Mustak’s workshop brought together a range of people in his area to get them talking to one another and seeing the world from a different perspective.

Mustak then helped film the event to produce a DVD film, which can be used in future workshops to show how a community can be brought together, despite individual differences within it.

‘Many barriers and problems in life prevent us from becoming part of our communities, but just with a little imagination, you can gather a whole range of people together and get them socialising and understanding one another,’ says Mustak.

‘This film shows that my vision came true, and I hope it can be used as a starting point in other communities to bring them closer together and to get them developing a strong community spirit which can evolve in the future.’

Mustak hopes his event, held at the Ethnic Youth Support Team (EYST) headquarters, can be replicated in the future.

‘A person is happiest when they feel satisfied within their community, and I hope this is just the start of bringing communities across my area together.’

You can watch Mustak’s film at the top of this story.