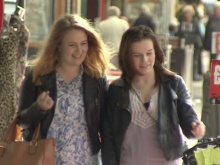 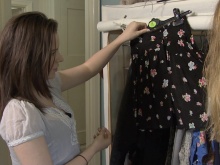 Brittany clearing out her wardrobe 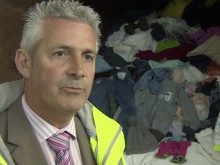 Two friends concerned by the amount of clothing thrown away each year are encouraging young people to recycle fashion through an innovative swap shop.

Lead Fixer Brittany Benton (17) and her friend Livvy Dimeck (16) both love fashion, but are concerned that many young people do not consider the ethical implications behind buying cheap clothes, or the environmental effects throwing away these cheap clothes has.

They believe that among young people ‘disposable fashion’ is on the rise with many purchasing inexpensive items and simply throwing them out when they are no longer wanted.

To tackle this, Brittany and Livvy held a swap shop at their school, St. Cuthbert Mayne in Torbay. The Fixers encouraged pupils to bring in unwanted clothes and swap them for something which would better suit them.

Brittany came up with the idea for the swap shop when she was looking through her own clothes.

‘When I was looking through my wardrobe, I realised I had loads of stuff that I never wore,’ she explains.

‘It was a waste. So I decided to create an event where people could bring their unwanted items and could exchange them with other people’s unwanted items.

‘When we first originally came up with the idea and told people it was exchanging unwanted items with other people, everyone was a bit anxious. But I think when we showed them the clothes, people really got in to it and they really understood the concept of the idea.’

Livvy hopes through the event young people can understand the environmental impact of clothing waste.

She says: ‘People do not really understand that our clothes are not all being made in England. They are being made abroad, sometimes in China or India, and there is pollution from transportation.’

The piece follows Brittany and Livvy as they run their swap shop, and it also sees the Fixers speaking with Ian Hartley from Torbay Council, who explains that around 300 tonnes of textiles are thrown away every year in the Torbay area alone.

Brittany and Livvy's Fixers project was supported by Sanctuary Housing.