Marching For the Love of Music 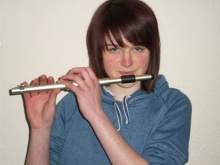 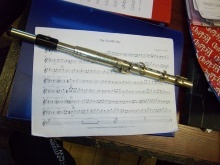 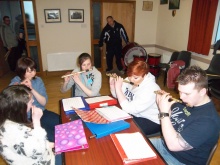 A Fixer is hoping to re-tune the flute as an instrument of music, not politics or religion by playing down negative stereotypes about marching bands in Northern Ireland.

Chloe McMullan of Dungannon is a member of a flute band, and wants to show that being part of a marching band should be primarily for musical and not religious or political reasons.*

Traditionally, many tunes have started out with political and religious connotations but Chloe, whose local flute band is made up of people of all ages and from a range of social backgrounds in the unionist community, says she is involved purely for the pleasure of playing.

‘Many of us play with school orchestras and some have gained recognised musical qualifications for our playing,’ she explains.

‘We play at community events, church services as well as traditional marching season marches. The majority of tunes we play are hymns and traditional cultural pieces.

'Yes, we play some tunes that some people perceive to be contentious, but we want to show that it is often how, where and when a tune is played which makes it contentious, not the tune itself.

‘Young people who might consider playing the flute need a positive example of why playing it in a flute band is an enjoyable pastime without involving the negatives which are so often highlighted.

‘Also I want to show people who have dismissed flute bands as being bigoted that they can be enjoyed simply for their music.’

Chloe would like her Fix to be aimed at young people, who haven’t experienced flute playing before, to show them how fun it can be.

'As soon as I heard about Fixers, I wanted to get involved.  The band is a passion of mine and Fixers is giving us the opportunity to help people listen to the music and not prejudice,’ Chloe explains.

*Although marching bands are a tradition for both the nationalist and unionist communities in Northern Ireland, the over-whelming majority are run by unionists. Marching bands from both sides can be seen as aggressive or provocative because of their association with past conflict and particularly when they parade through areas most commonly associated with the other community.