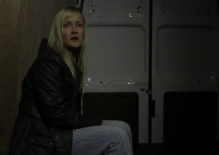 A Sheffield Fixer’s film, which raises awareness about the plight of women being trafficked into the UK, is complete.

Law student Leanne Dodson (24) wanted to highlight the challenges victims of human trafficking face after being given just 45 days of safe accommodation when they escape from their captors.

The short film shows a sex-trafficked victim being rescued by police and then taken to a safe house, where she is left feeling isolated and alone.

Leanne explains that after being rescued, many human-trafficking victims are left in limbo and the accommodation provided for them is often a bare flat with no heating or furniture.

The Fixer is part of a group of volunteers who meet once a week with victims of human trafficking, and feels a film is the ideal medium to inform the public about this crime.

‘I hope the film makes some kind of difference. I know the stories these women have to tell and it’s worse not to do something to help.

‘The film is hard hitting and that’s because it talks about a serious issue. Hopefully working with Fixers to create such a thing will help change it for the better.’

The film shows how victims of this kind of abuse can sometimes go under the radar and often are left alone to fend for themselves in a country they don’t know or understand.

Leanne adds: 'I plan to make the film available to as many people as possible so we can get the message out there.

'It's a serious issue and needs serious publicity so people know it's happening and can stop it.'