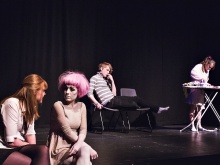 Some of the cast in the play 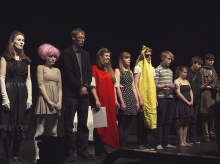 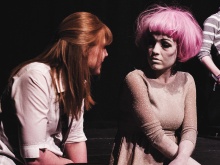 A scene from the play

A group of Fixers, who created an independent theatre company providing work experience for unemployed young people, have performed their play for the first time.

Their play - entitled ‘Every Which Way But Where?’ - required a full cast of acting talent and backstage production staff, with all the positions being filled by job-seeking young people in their area.

The team, who are all from Norwich, wanted to create an on-stage performance which analyses the decisions young people make during their teens, to give them confidence in choosing the right path for their future.

The main character in the play is Kate, who struggles to decide what to do with her life, and whether she should go to university or get a job.

Lead Fixer Rachel Wearmouth (21), who starred as Kate in the film, wanted the play to show that there are many different paths in life.

‘What path may be right for one person might not be for another,’ says Rachel, ‘And we hope this play shows the range of choices a young person has.

‘Also what we wanted to do through this play is provide people with experience which they themselves can use when they may be making similar decisions in life.

‘The play has been excellent, and I’m really pleased with it, not just for the performance, but for the skills we have helped other young people realise they have.'

The audience reviews were glowing, with many commenting on the acting and production skills of the young people - many of whom had no previous theatre experience.

'This is a great project, and I really hope it helps boost the CVs of the people involved,' 22-year-old Alice Mills says. 'Don't give up job hunting, and make sure you use the transferrable skills you picked up by doing this play.'

The group hope to continue their theatre group and perform at more venues in the future.