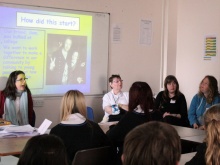 The Fixers presenting their film 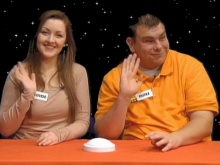 Fixers Chloe and Miles in the film 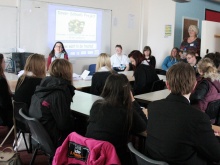 A group of Fixers, aiming to change the treatment of people with learning difficulties, have screened their film to a captive school audience.

The Fixers from the Skillnet School Team – who are aged between 18-55 years old and come from across Kent – are tackling misconceptions about learning difficulties and disabilities (LDD) through a quiz film.

All the Fixers in the group either have a learning disability themselves, or know someone who does.

The screening of their film to pupils at Abbey School in Faversham, Kent, was part of a Focus Day, which aimed to encourage young people to think about learning difficulties, and show them how people with disabilities want to be treated.

Around 150 pupils saw the film throughout the day.

Schoolteacher Cyril Manuel said he had not seen his pupils concentrate so hard on a film before.

‘The film was very good, very powerful,’ he said. ‘I think it gets us challenging our perceptions of other people who we think are different.’

The Fixers from the Skillnet team – who come from the towns Thanet, Dover, Shepway and Swale – hope to continue screening the film in their towns in the future.

In a group statement, the Fixers say: ‘We had some really good comments from the students and teachers.

‘This was the first time our film had been used in a presentation and we enjoyed it very much. Everyone gets so much out of them, including us.’