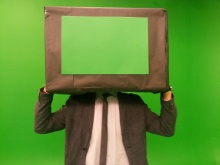 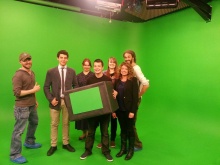 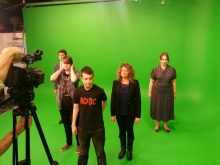 A Salford Fixer has completed filming his music video, which aims to combat prejudice against transgender people.

With the help of Fixers, Alfie Austin (19) has created the video showing the media’s influence over society’s ‘negative’ stereotypes of the trans community.

As a way of symbolising media bias, the video begins by presenting the group as ‘TV Heads’ with negative words displayed across the screens.

As the piece gains momentum, the screens crack and the ‘individual’ underneath is shown.

Alfie, who was born female, says he has been treated very differently since coming out as trans a year ago.

He’s lost close friends who couldn’t handle his new life and has even had to quit a job.

The Salford teenager is a keen music enthusiast and feels his Fixers music video is a great way to change peoples’ opinion about the trans community.

'I feel this was the best way for me to stand up for the trans community, creatively.

‘I want to show how everybody is equal and how the media plays a key role in how society views certain individuals. From what I’ve seen, there isn’t much positive press about trans people, and this is something I want to change.’

Alfie hopes this resource will send a positive message to society and break down barriers for trans people.

‘I chose to work with Fixers because they champion young people's concerns,’ he adds.

‘I really feel passionately about this issue, because it affects me every day. I want to give hope to others like me, who are too scared to speak up.

'I plan to put the video online so it can be shared by as many people as possible. This is the only way we're going to change peoples' views about the trans community.'

The resource is due to be completed at the end of this month.