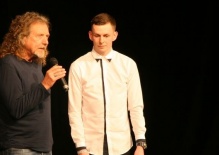 Drummers at the event

Dancers performing at the festival

An event, inspired by a Fixer aiming to showcase the musical and performance talents of those with special needs, was attended by over 200 people as well as rock royalty over the weekend.

In addition to speaking to the audience and listening to some of the acts, Robert took the opportunity to congratulate the Fixer on his efforts, offering his on-going support to Jordan in his musical career.

For the 19-year-old Fixer, who finds it hard to open up in certain social situations, music is a great way to express himself.

Jordan says it was an ‘extraordinary experience’ to get advice from such an influential person and have his backing for his campaign.

‘Meeting Robert Plant was incredible,' he says.  'I sat talking to him for about an hour - he was giving me advice and just asking what style of music I was into.

‘It was extremely motivational to have somebody like Robert come to the event - not only for me, but it gives an extra something to what we’re trying to achieve.’

With the support of Glasshouse College, where Jordan studies, he was able to organise the sold-out event, which showcases a variety of acts, including a piano performance, opera singing and a dance piece.

He will be working with Fixers to create an MTV-style documentary of the festival, highlighting what people with special needs can really achieve when given the chance.

‘There are so many people, of all different ages, who do not understand what autism is, especially as the disability isn't visible or obvious,’ Jordan explains.

‘I want to educate people about autism in a creative way and let them know that although I have autism, there is so much I am, can, and will do if I have the right support in place.

‘Having a disability doesn’t have to stop you from achieving your hopes and dreams.

‘Working with Fixers has been amazing. It’s nice to meet people who are as passionate as I am about making change.’