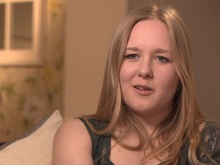 Becki talking about her stroke 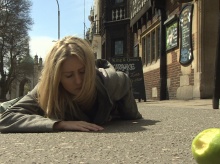 A reconstruction of Becki's stroke 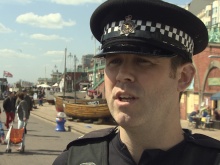 An outgoing student, who suffered a major stroke which paralysed the left side of her body, is creating a short film to highlight how strokes can occur at any age.

Becki Cobb (now 23) was walking through Brighton in February 2011, when she began to feel light-headed. Initially she thought she was hungry, and reached for an apple in her handbag.

The next thing she knew, she was crawling across the pavement, struggling to pick herself up. Becki had suffered a major stroke.

‘I remember people looking at me and carrying on walking, so I thought maybe it wasn’t that serious and maybe I’d fainted,’ says Becki.

‘I just laughed to myself and felt confused. I did not know what had happened, and really thought I would be fine.’

At the time, two police officers happened to be passing by and noticed Becki on the floor. One of the officers, PC Stuart Brown, did not initially think a stroke caused her to fall.

‘She was on her hands and knees and seemed very, very confused,’ he says.

‘Our initial thoughts were that it was probably drink or drugs, because I think though the symptoms shouted out stroke, we discounted it because of her age.’

Upon closer inspection, the officers realised something was wrong and they called an ambulance.

Becki says: ‘When I woke up in hospital, the left side of my body was completely paralysed. I remember my family and friends being there fussing around me, and I was thinking “why am I here?”’

Becki suffered a stroke after a blood clot passed through her heart. Two years on, Becki still needs physiotherapy but is slowing recovering. Now she wants other young people to be aware that strokes can happen at any age.

‘With Fixers I’m going to create a short advert which will play on people’s stereotypes of strokes in older people,’ Becki says.

‘I want people to recognise the signs of stroke in young and old people, and for them to know that there is a life after a stroke.’

As well as telling her story, Becki also meets Jodie Mickleburgh from the charity Different Strokes to talk about how common strokes are in young people.