Seeking Safety in the UK 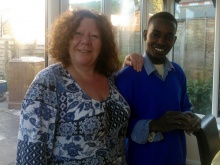 Abdul and his foster mum Ira 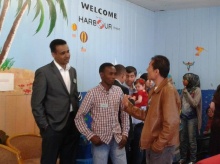 Abdul with the group at the Harbour Project 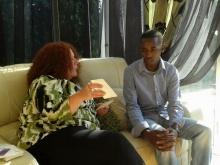 A 16-year-old Fixer, who spent eight years seeking safety after he and his brother fled his war-torn village in Sudan, is creating a short film to make young people in the UK aware of the struggles facing many asylum seekers.

Fixer Abdulkareem Musa Adam (16) was just seven years old when he and his younger brother, Yousif, returned home to the farming village of Kass, West Darfur, Sudan, to find their home destroyed and their parents and two sisters killed.

Pro-government forces, the Janjaweed militia, ambushed the village – one in a series of attacks which made international news in 2004.

Abdul and his brother sought refuge across the border in Chad. Eighteen months after moving to Chad, Abdul became separated from his brother and has not seen him since, though he is still searching for him with the help of the British Red Cross.

In 2007, after three years in a refugee camp in Chad, Abdul was told refugees would have to return to Darfur, so Abdul fled on foot to neighbouring Libya.

But after almost four years in Libya, Abdul was forced to move once more due to a political uprising against the Libyan Government in 2011.

Worried for his safety, Abdul caught a boat to France, where he slept rough on the streets for six months before coming to the UK on the back of a lorry.

Social services took Abdul into care upon arrival, and he was quickly placed with a foster parent.

Now living in Swindon with his foster mum Ira, Abdul is being helped start a life in the UK thanks to his foster family, and nearby asylum seeker support group The Harbour Project. Abdul has also began studying English at college in Swindon.

Through his short Fixers film based on his life, he hopes to inspire young people to think differently about asylum seekers.

‘I want to educate other young people about my journey, to make people aware of the things asylum seekers have to go through to find somewhere safe to live.

‘Usually they are running from danger to safety, just like I was. I know how lucky I am to have found somewhere safe to be. I hope that people in the UK can help others like me, and that my film will show the reality of seeking asylum and change people’s opinions about asylum seekers.’

Abdul’s film is currently in the production stages.