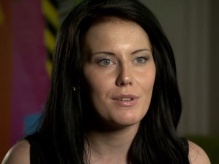 Hollie being shown what photo editing can do

A Fixer, who has undergone plastic surgery which has left parts of her body permanently numb, is now warning other young women about media pressures to have the ‘perfect’ body.

This story was shown on ITV Granada Reports in May 2013.

21-year-old Hollie Capper from Warrington was just 18 years old when she had breast augmentation surgery.

She thinks the media has a lot to answer for when it comes to giving young girls unrealistic ideas of body image.

‘I wish I hadn't rushed into an operation that has left my breasts, nipples and armpits completely numb,’ she says.

Hollie was bullied at school for the way she looked and felt that the only way she could feel good about herself was by altering her appearance to fit the media’s stereotypical image of the perfect glamour girl.

At 18, Hollie was working as a dancer in a nightclub. ‘At that time I was in an unhappy relationship and working in an industry that required the glamour girl look,’ she says.

‘I was immature and didn’t think about the consequences – now I want to stop others making the same mistakes I did by teaching young girls that many of the images they see in magazines are airbrushed - and that placing such a huge importance on appearance is unhealthy.’

‘I thought that having bigger boobs would be the answer to all my problems and thought it was the key to being famous.’

Providing her expert opinion in the piece is Dr Eileen Bradbury, Consultant Psychologist, who also thinks the media has a significant influence on body image.

‘There is an increasing trend for young people to want surgery at a young age,' Dr Bradbury explains. 'Instead of being something bizarre or unusual or you have to be very careful about it, it’s become something you just do and I think that’s the overall problem.’

Hollie is now hoping to use her personal experience to let other young women know about the risks involved with plastic surgery and tell them that not everything in the press is as it appears.

‘I’m going to be working with Fixers to stop young girls going down the same route as me,’ she says. ‘I want to create a poster campaign which shows that the images used in the media are not real.’

Hollie's project was supported by the Wellcome Trust.