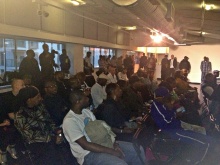 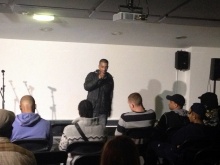 Fixer Asad performing on the day 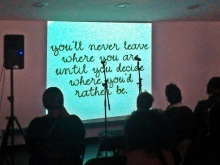 One of the slogans for the day

A group of Fixers, who feel many young people isolate themselves in their London neighbourhoods, have hosted an event to bring a range of communities together.

Through a day of music, activities, and motivational speaking, the group wanted to inspire young people to broaden their horizons, meet new people, and follow their dreams.

The Fixers, who come from across South West London, think many young people are scared to venture outside the borough where they live and this limits them in life.

Lead Fixer Asad Mahmood (22) thinks that avoiding or conflicting with people from different postcodes is often just based on misunderstanding.

‘London is a very multicultural and diverse city, but it is very segregated also,’ Asad says. ‘Some people are scared to mix with other people, and this sometimes leads to small gangs forming in their areas.

'This event was an eye opener. It gave young people the chance to know what opportunities are out there and who they can meet.

‘The performances were really good and everyone supported each other in a really positive environment.’

The ‘Community Cohesion Day’ attracted over 40 people from across London, and featured young singers and speakers from across the city. Asad hopes the event is just the start.

‘Young people were coming up to me and thanking me. They were impressed and excited about this opportunity and the event. They thought it was really well organised, and I hope we can do something like this again.’