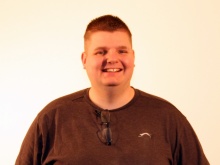 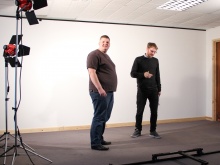 John rehearsing with Michael from Fixers

A young man determined to change the misconceptions held towards fostered children has completed his Fixers film.

John Denver’s film ‘Different Perspectives’ (view above) shows John speaking about his experience as a foster child, explaining that although foster children may have a complex family setup, they do not deserve to be bullied or treated any differently to a “normal” child.

The 19-year-old Bristol resident was taken into care when he was just eight years old due to troubles between his mother and father. At school, John soon became a victim of bullying as other children would remark that he did not have “real” parents.

‘It was hurtful to hear all those things,’ he says.  ‘And all the bullying made me misbehave a lot.

‘With this film, I would like to show people what it is like to be in care so that others have a better grasp of their peers who have a different and often unsettling home life.’

John remained with his foster family until he was 18 years old, and appreciates the care he received.

‘I was lucky to have supportive foster parents who helped me through the difficult times,’ says John.

‘Everyone is different, but everyone deserves respect at school. We need the foster care system to let children build bright futures for themselves, just like I am.’

Currently John is working with Fixers to discuss distributing the film in local schools.