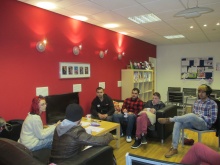 The group speak to producer Adam during Big Meeting 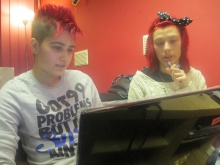 A group of Fixers want to create a theatre show to help combat negative stereotyping of the LGBT community.

The Fixers from Bradford hope their Fix will help combat homophobic bullying, and support and empower LGBT young people.

Based on their own experiences, the group feel that growing up there wasn’t a clear message that being LGBT is okay.

Lead Fixer Ryan Edgerton of Bradford knew he was gay at the age of 12, but felt there was a lack of guidance and support when he came out.

'There wasn't really anybody to look up to when I came out,' Ryan explains.

'So there was very little advice out there or words of inspiration to let you know being LGBT was fine and that you were normal.'

Ryan and his team of Fixers want to put on a play which shows three different stereotypes society has of young LGBT people.

The central aim of the production is to highlight that LGBT people are individuals too and should not be automatically labelled.

The group also would like to have a 'Hot Seat Q&A' session where a school audience watching the play can ask each actor questions, who will answer the audience in character and encourage a dialogue to be generated on the topic.

'We think this would be a great way for the audience to get a better insight into what it means to be gay,' Ryan says.

The team of Fixers hope their Fix will help combat discrimination and encourage young people to be proud of their sexuality.

'Our fix will hopefully inspire more young LGBT people to be happy with who they are. For me, being gay is normal so I'm not ashamed of anything and wouldn't change it.

'We want to educate society on how people are different and how we need to just get along.'