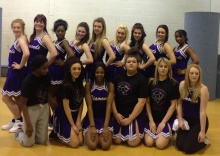 Zanele with her cheerleading squad 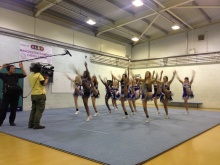 The squad performing for the broadcast shoot

A keen cheerleader, who was teased for doing what she loves, wants to campaign for cheerleading to be taken seriously as a sport.

Zanele Mpofu (18) of Prestwich, Manchester, has been cheerleading since she was 9, but is concerned many people still mock cheerleaders as being ‘ditsy’.

A member and junior coach with the Manchester Diamonds squad, Zanele wants to create a resource with Fixers showing there’s more to cheerleading than make-up and pompoms.

‘Most people see it as a bit of fun,' Zanele explains.

'What they don’t realise is how strenuous it can be. It’s really demanding on your body.’

‘Boys sometimes say we should cheerlead at their football matches. I don’t think they take it seriously.

'But we train just as hard if not harder.

'It’s not easy to pull off a routine like we do, while making it look easy to the crowd with a smile on our faces.

‘A lot of people think it’s just for girls but it’s not true. In America it’s quite cool to be a male cheerleader but not here.'

The Prestwich sixth-former trains up to nine hours a day on weekends, and has travelled all over the world to compete in tournaments.

She is studying to be a lawyer but maintains cheerleading will always be a part of her life.

Zanele has won awards and received recognition at a national level, and is considered to be an outstanding contributor to her club.

She thinks cheerleading is not only a great way to keep fit, but also a fun social activity for young people to get involved in.

‘Basically I want to raise its profile in this country and hopefully make people realise it’s a serious sport.

‘Working with Fixers I think we can really make a change and get more people doing something that has loads of benefits.’