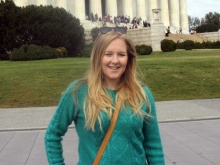 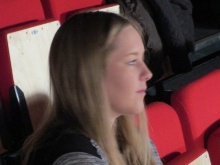 An adventurous young woman, who was paralysed on her left side after a major stroke, is creating a campaign to highlight how strokes can happen at any age.

Two years ago, Brighton Fixer Becki Cobb (23) was walking through the city thinking about an upcoming trip to New Zealand when she collapsed outside a pub. Becki was embarrassed by the fall and kept laughing, prompting onlookers to think she may be drunk.

But two passing police officers noticed something was wrong when Becki had trouble moving from the pavement.

At the age of 21, Becki had suffered a major stroke. She explains: ‘It soon became frightening. I could not really get up off the ground but sort of thought it was because I fell over.

‘But once an ambulance was called, I knew it was serious. The next thing I knew, I was in hospital, surrounded by my family, and could not move my left side.’

The stroke was caused by a small hole in Becki’s heart, a condition which around a third of young adults in the UK have. A blood clot passed through the hole and caused a blockage.

Becki was in hospital for six weeks, and still receives physiotherapy to regain movement.

Despite the stroke, Becki graduated from university and even went travelling to Southeast Asia.

Becki, who is now a Marketing Assistant in Brighton, hopes her campaign can show that young people who have strokes can still achieve their ambitions.

‘I still wear a leg brace because my leg drags a little, but I am confident I will be able to walk without it again,’ she says.

‘I want to inform young people that strokes can happen at any age and, if it does, it does not mean that you should give up on life.’

Becky is currently working with the Fixers Creative Resources team to develop her campaign.