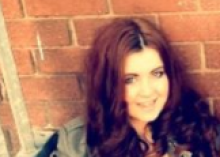 A Fixer from Northern Ireland wants to combat social pressures on teenagers to look ‘perfect’.

Dearbhla Crossen of Belfast wants to address body image issues for her Fix, and hopes to inspire other young people to be happy with how they look and not strive to look a particular way.

The 16-year-old believes social media has a large influence on how young people think they should look and now wants to create a campaign that encourages teens to embrace the way they are.

‘All these pictures we see of thin celebrities are not always good for young girls to see, because they want to look like them,’ she says.

‘Many young girls my age see these people as the ‘correct’ way people should look and it can be quite dangerous because at that age, you’re easily influenced.

‘And it’s not just girls we want to target with this project, because it can just as easily affect boys too.

‘I’m not saying don’t look good - of course everybody wants to. What we want to do is tackle the pressure on young people.’

Dearbhla and her group of Fixers hope to develop a campaign, which will not only deter young people from taking the way they look too seriously, but also highlight potential health risks - like eating disorders – when this is taken to extremes.

Dearbhla also wants young people in her community not to judge people by the way they look.

A social media user, Dearbhla says she’s noticed a trend of young people being put down on social media sites, because of their appearance.

‘I think this is quite common and see it all the time. At the end of the day, we’re all human and putting somebody down because of the way they look can have really bad consequences,’ she says.

‘Everybody is different and to judge somebody by their appearance is wrong. This is what we are fighting to change.

‘We need to tell people what body image is all about. It’s about being comfortable with the way you look and that’s the message we want to promote.’

Dearbhla's project was supported by the Wellcome Trust.