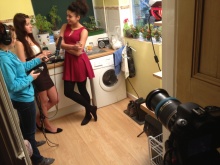 Filming a group of female actors for the film 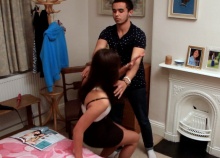 The boyfriend in the film pushes the girlfriend

‘Melody’ – not her real name – was emotionally blackmailed and physically harmed by her ex-boyfriend, resulting in her suffering bruising from two separate attacks.

Her film (below) uses her experiences in the plot, following a young couple who are in a volatile relationship.

It shows the possessive nature of the boyfriend, but also why he feels so insecure in the relationship.

At the end of each scene, the viewer is asked to ‘select’, which scenario should come next, showing the possible path a relationship can take if domestic violence is reported or not.

The film will be distributed to local schools and included in lessons to show how domestic violence can manifest itself.

Melody explains: ‘The film is to raise awareness of the issue of domestic violence – not just to highlight the abuser, but to make the abuser and the victim realise they can both get help to sort their problems.

‘People feel lots of emotions, but domestic violence is never the answer. This film shows that you need to seek help as soon as possible.’