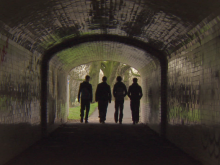 A group of free-running Fixers from Carlisle are hoping to change negative stereotypes around this outdoor phenomenon by creating a film to inform and educate the public about the sport.

Lead Fixer Christian Thompson (18) often gets a negative reaction from people who think he is up to no good when free running.

Originally starting in France, the activity has grown in popularity and basically involves people aiming to move from one place to another on their feet, negotiating the obstacles as quickly as possible.

Christian wants their story to open people’s minds about free running in this country.

He explains: “We want to raise awareness of free running in our area, so that people recognise it as an actual sport.

“I hope to encourage more people to try it out because it is a great way to keep fit and active, too.

“I also want to educate people about it because I feel that people don't understand what it is we're doing, so they think we are being dangerous or causing damage.”

The group, who are all members at the local youth club, want to make a film to demonstrate the beauty of free running in the hope more people will begin to be interested by it.

They also aim to hold an event where they’ll invite the police, local councillors and MPs.