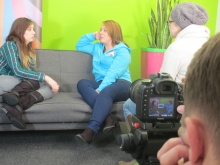 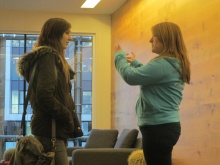 Fixers is back in the Border region with a brand new look and many more inspiring stories about young people changing things for the better.

As part of the launch show, ITV News Lookaround will look at what Fixers have been up to in the region and look forward to what’s in the future.

Among those featured in the film is Fixer Louise Allonby (21), who, three years ago, tackled the issue of legal highs and the danger they pose.

Louise, originally from Maryport in Cumbria, made a hard hitting film to make teenagers see the hidden dangers behind taking over-the-counter drugs.

Louise said: “It’s something that I felt strongly about. I’ve seen people go through peer pressure with legal highs, and it wasn’t a nice thing to see.

“Growing up in a small town where there’s nothing much to do is difficult and I’ve seen first- hand how it can affect people. Friends of mine have turned to drugs including the so-called ‘legal highs’ because they think they’re safe.

“I’ve managed to avoid getting involved with all that myself but I can see how easy it is for people to go down that route. I just want people to see that there’s another life outside of drugs and that it’s important to break the cycle before any lasting effects kick in.

“Working with Fixers was great because it allowed me to express myself and tackle an important issue.”

The film will also focus on a group of current Fixers who aim to raise awareness around free running. They want to make a film about the possible health benefits around it and also change negative stereotypes around the activity.

The group want to raise the profile of free running in this country and eventually develop a dedicated space in Carlisle.