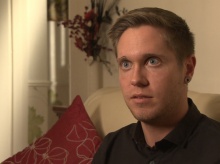 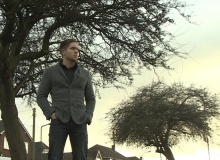 Russell, from Chatham, Kent, was walking to work in the nearby town of Rochester in February this year when he collapsed outside of a café.

He fell face down onto the pavement, breaking his jaw, and had stopped breathing. Aged just 23, Russell’s heart stopped functioning.

Luckily, the café owners – Harry Smith and Peter Moorcraft – saw Russell fall and quickly used their expertise as an ex-nurse and ex-paramedic to resuscitate him.

Russell received treatment in hospital for seven-weeks where it was discovered he suffered from a weakening heart condition called dilated cardiomyopathy, or DCM.

Now Russell has to breath with the help of a pacemaker and defribrilator, meaning he cannot return to work, but he is still thankful for the work of Harry and Peter.

“They saved my life,” he said. “Had no one seen me, I would have just died there. It’s scary to think about that, and that is why I want young people to get their hearts screened.

“I was relatively fit and I had no symptoms whatsoever, but around 80% of these heart conditions do not show any symptoms.”

Russell hopes to spread his message by producing a range of unisex jewellery with the help of his friend Jessie.

“The main aim of my Fixers project is to save people’s lives, so that people know they can be as fit and healthy as they like but they might have an underlying heart problem. If I can just save one person then that would be enough.”