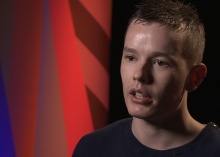 Dog lover Zak Soan (21), from Peterborough, has developed the ability in taming even the most aggressive dogs, despite the difficulties from having only 25% of his sight.

He aims to encourage young people to better understand dogs through a part-animated part-documentary film and lessen the amount of dogs being destroyed or abandoned.

“I've been around dogs my whole life, and maybe I do have some kind of natural ability with them. But it's about understanding a dog as a wonderful companion and working out their behaviour.

"A lot of children approach dogs in the absolute wrong ways and cannot tell if the dog is going to react. I want to educate people on how to treat dogs to stop them being overlooked just because of their behaviour.”

In 2011 Zak adopted an ill-treated four-year-old Staffordshire Bull Terrier regarded as being dangerous.

Through continued attention to how his dog (Taz) acted, Zak has managed to tame him through communication and care.

“I hope my  film can be taken to schools, classes, and any other groups around the country,” he said. “Owning a dog is a privilege, not a commodity, and it is important they are looked after correctly.”

“He is just amazing around the dogs. I know that he can and will make a difference to educating children about dog ownership.”